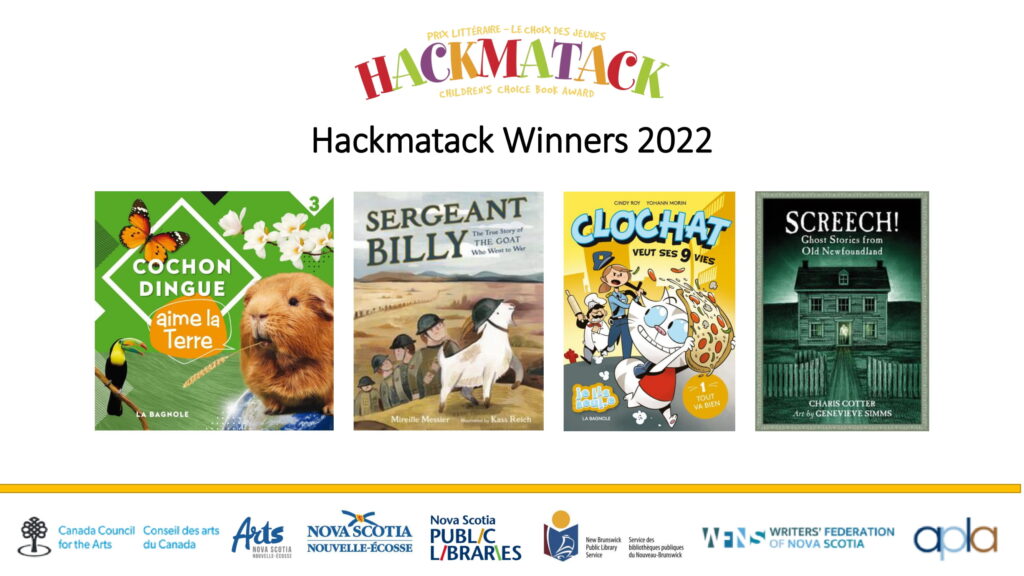 The winners of the 2022 Hackmatack Children’s Choice Book Award were announced this morning in a live virtual awards ceremony. They are:

Mireille Messier for Sergeant Billy: The True Story of the Goat Who Went to War, illustrated by Kass Reich (Tundra Books, 2019).

This charming true story follows Sergeant Billy from his small prairie town in Saskatchewan to the trenches of World War I and back, through harrowing moments but also moments of camaraderie and celebration.

Reimagined from family stories told across Newfoundland and passed down over generations, these ten spine-tingling tales traverse centuries and introduce readers to the Rock’s nooks and crannies.

Clochat is a cat who likes to lie, steal and play tricks. Along with his new friend, a greedy alley-cat, Clochat move into a huge tree in the heart of the forest, unaware that it is precisely the one that will soon be installed in front of Rockefeller Center, in New York.

Across the Atlantic region, over a thousand children in grades four to six participated in the Hackmatack program by reading from the shortlist of 40 titles (20 French and 20 English) and voting for their favourite in each category.

Hackmatack’s 2022 author tour was predominantly virtual, with twelve shortlisted authors conducting virtual visits to classrooms and libraries across the Atlantic region. With the support of the Canada Council for the Arts, Hackmatack was also able to return to in-person programming by bringing shortlisted authors who are based in the Atlantic provinces to several local schools and libraries. Getting the chance to meet and learn from a real author was a thrilling and memorable opportunity for young readers.

Taking place alongside the author tour, Hackmatack’s second annual Festival of Reading featured public events for authors and illustrators working in children’s literature, with a particular focus on supporting emerging BIPOC (Black, Indigenous, and People of Colour) creators. Events included a virtual showcase of twelve up-and-coming BIPOC authors and illustrators from across Canada, a workshop for authors on how to write a children’s series, and panel discussion at the Halifax Central Library where three BIPOC authors shared their advice and experience.

Hackmatack is also excited to announce the new shortlists for our 2022/2023 reading program. Visit our website to view the 2022/2023 English and French shortlists.