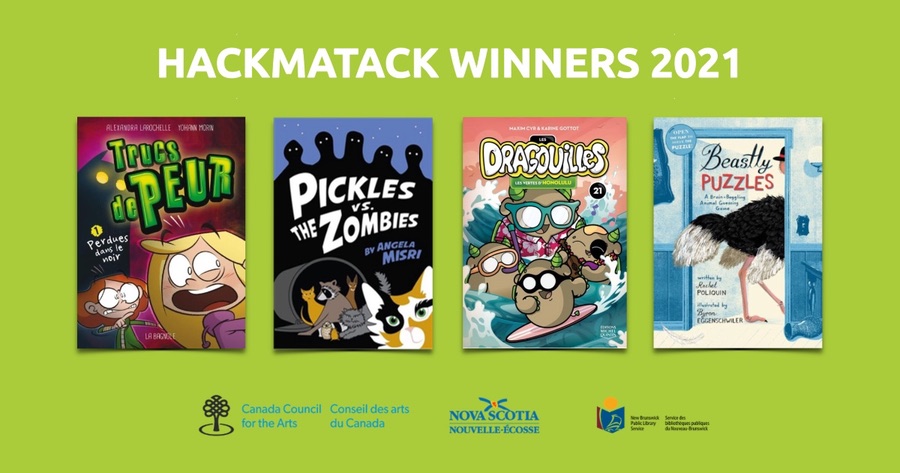 The winners of the 2021 Hackmatack Children’s Choice Book Award were announced this evening in an online presentation broadcast on YouTube and the Hackmatack Facebook Page. They are:

Beastly Puzzles (Kids Can Press) is about looking at animals closely and really thinking about why they have the parts that they do. If you look closely at any animal, you can see how it has been particularly adapted to its lifestyle: how it moves, how it finds dinner, how it eats dinner, how it protects itself, and how it is particularly and perfectly adapted to its particular habitat. Beastly Puzzles gives readers clues and asks them to guess the easily identifiable animal being described.

Pickles vs. the Zombies (DCB) tells the story of a calico house cat whose world is turned upside down when humans succumb to the zombie apocalypse. She doesn’t know where her “pet,” the human child Connor, has gone, only that zombies are everywhere. Determined to find him, Pickles sets off with her animal friends, exploring a world she has only seen through a window.

Dragouilles 21 : Les Vertes de Honolulu (Michel Quintin) Soak up the aloha spirit by visiting the tower of the same name. Try to tame the waves of Waikiki. Strum the strings of a ukulele and learn to dance the hula. Cook a bowl of poke and explore the locations where many movies and TV series were filmed.

Trucs de peur tome 1: Perdues dans le noir (Bagnole) Mégane and Rosalie are half-sisters who hate each other more than anything. At 9 years old, Mégane is the most popular in her class while 8-year-old Rosalie is afraid of everything, even her shadow. When they are sent to spend a week with their grandmother, what they don’t know is that, with her help, they will have to overcome their greatest fears and join forces to overcome their worst nightmares.

This year Hackmatack conducted virtual visits to registered reading clubs due to the onging pandemic. On the weekend of the awards announcements, we presented the Hackmatack Future Voices Showcase, featuring nine up and coming BIPOC Canadian authors and illustrators, followed by Future Voices Mentors, an hour-long online session where authors Andre Fenton and Rebecca Thomas, and illustrator Hatem Aly shared their advice and experience.

Thousands of children in grades 4 to 6 participated in the Hackmatack program over the course of the school year by reading from the shortlist of 40 titles (20 French and 20 English) and voting for their favourite in each category.

The Hackmatack Children’s Choice Book Award program is supported by the Canada Council for the Arts, Nova Scotia Department of Education, and the New Brunswick Public Library Service, among others. For more information about the award program, visit hackmatack.ca.